From November 24th to December 4th, 2019, United States Labor Against the War (USLAW) and the Alliance for Global Justice (AfGJ) led a joint labor delegation to Colombia. The delegation was timed to coincide with the third anniversary of the signing of the peace accords that ended more than five decades of war between the Colombian state and the Revolutionary Armed Forces of Colombia – People’s Army (FARC-EP). Participants included union members and staff from UE, National Nurses United, UNITE HERE, the International Union of Painters and Allied Trades, the United Steelworkers, and the National Writers Union. The delegation also included a member of About Face: Veterans Against the War and Latin America solidarity activists.

As a board member of both AfGJ and USLAW, I helped lead this delegation and served as an interpreter. When we planned and began organizing the delegation, we had no idea that we would arrive in the country in the midst of the largest and broadest popular mobilization seen in Colombia since the national Civic Strike of 1977. On November 21st, 2019, two days before most of us arrived, Colombians took the streets nationwide as part of a National Strike called for by the country’s three main labor confederations (CUT, CGT, CTC) along with farm worker, indigenous, Afro-Colombian, student, feminist, and retiree organizations. That one-day National Strike, launched as a response to President Ivan Duque’s anti-working-class economic policies, systematic killings of organizers and social movement leaders, and refusal to respect the 2016 peace agreements, has now gone on for weeks and promises to continue into 2020. Sadly, on the day our delegation arrived in Colombia an 18-year-old protester named Dilan Cruz was intentionally shot at close range with a tear gas canister by riot police, just two blocks from our hotel. Cruz, who was just days away from graduating high school, died less than a week later. 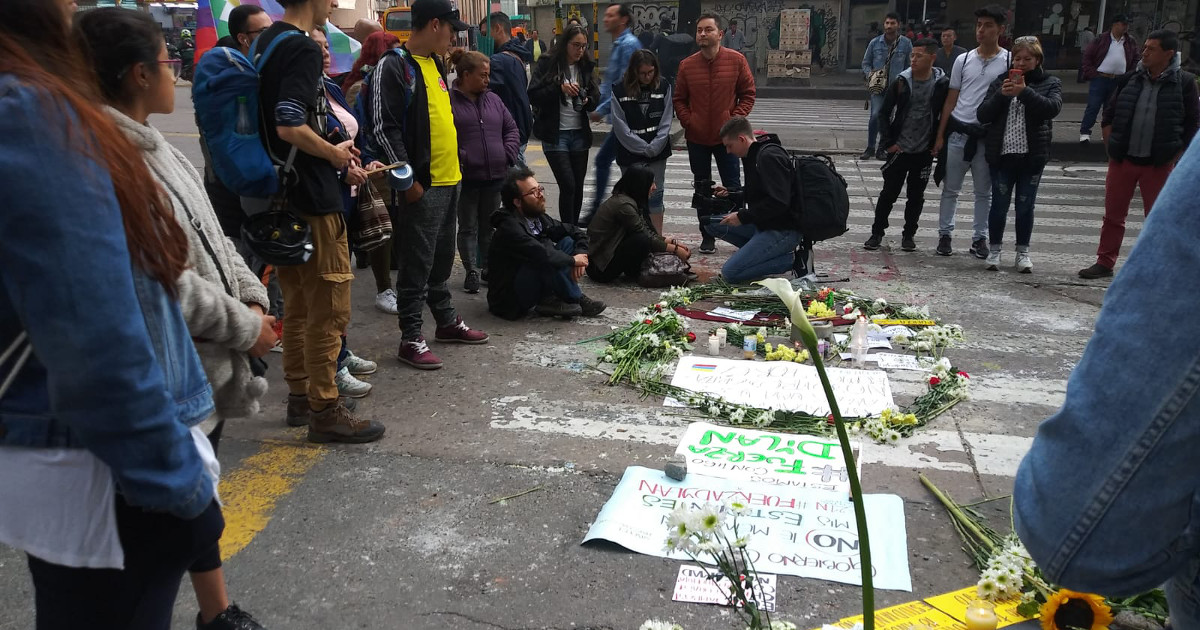 Colombia was supposed to have entered a new “post-conflict” era after several years of negotiations between the guerrilla army of the FARC and the Colombian state led to a peace agreement in 2016. However, since then about 1,000 civilians, including union members and leaders, have been murdered for their political convictions and for their defense of Colombia’s poor and working-class. University students have had to protest and go on months-long strikes to force the government to increase spending on public education by $1.4 million, and the current administration is following through on its threats to “shred” the peace agreement.

Despite being ranked the 7th most unequal country on the planet by the World Bank, Colombia’s government intends to reduce the minimum wage for young workers by 25 percent, raise the retirement age, privatize the national pension system, cut corporate tax rates, and do almost nothing to raise a minimum wage that stands at US $267.27 a month (a sum deemed “ridiculously high” by Finance Minister Alberto Carrasquillo) for 48 hours of work a week. The government also intends to expand the number of items, including food, that will be subject to the 19% sales tax, while excluding the sale of real estate assets and fielding proposals from congress members of the ruling Democratic Center party to eliminate the sales tax on plastic surgeries, among other “important” things.

On our delegation we met with an array of union members and labor organizers who form part of what they call clasista unions. These are politically independent, class-struggle-oriented unions that fight not just for strong union contracts and the immediate interests of their own members but for all workers even if not members of their unions. These unions are rooted in the workplace but also in the wider communities in which workers live. Their union halls serve as meeting spaces for building social movements and every one of the unions we met with runs labor schools which train workers on the mechanics of trade unionism and provide a comprehensive political education to help them understand why the world is as it is and how to change it. Not surprisingly, all of these unions are actively participating in the National Strike.

In the capital city of Bogota, we met with leaders of USO (Oil Workers Union) who told us about the strike the union led in 1948 against Tropical Oil (formerly a subsidiary of Nelson Rockefeller’s Standard Oil). That strike helped lead to the establishment of the country’s first publicly-owned company, Colombia’s national oil company Ecopetrol. Painted on one of the walls in the union hall is a mural of members of the union who have been imprisoned and murdered over the decades. Despite the repression, the USO remains one of Colombia’s strongest and most militant unions. 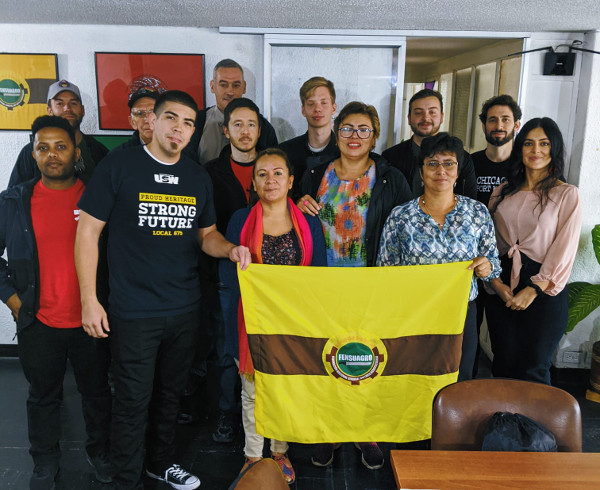 We also met with Fensuagro, which is the union for Colombia’s rural workers. Fensuagro has had hundreds of its members kidnapped, tortured, and murdered by the state and right-wing paramilitary death squads funded by business interests since its founding in 1976. It is quite likely the most persecuted union in the world. Its courageous members, including coca growers, brave death to fight for the rights of those who work the land and to change the system of land ownership. According to Oxfam, 0.4 percent of the richest landowners control 67.7 percent of all the land in Colombia. A million farmworker families have less land to work and live on than the typical Colombian cow has to graze.

In the city of Cali, on Colombia’s Pacific coast, Sintraime, which represents workers in the mining, metallurgy and rail sectors, hosted us for a talk with other local unions and students from the Universidad del Valle. We met members of the municipal workers union, Sintraemcali, whose successful decades-long resistance has protected the city’s public water, electricity and telephone services from being sold to the highest bidder. A few days after our delegation ended, we received word that one of the Sintraemcali union leaders we had met with, Juan Carlos Ordoñez, was approached on the street by armed men who warned him and others in the union to stop their involvement in the National Strike.

We visited workers in the nearby city of Buga who have been living in a tent outside a Cristar glass factory, a subsidiary of Owens Illinois, a Fortune 500 company based out of Ohio, for eight years now. They are protesting being fired when they organized a union in 2011 in order to be recognized as permanent workers. Their union, Sintradit, organizes temporary and contract workers, who are robbed of their full rights and benefits by being classified as independent contractors.

In the port city of Buenaventura, through which 60% of all of Colombia’s foreign trade passes, we met with fishermen, stevedores, and other residents whose citywide civic strike in 2017 shut down the port and served as a precursor to today’s National Strike. Despite the riches that are transported through Buenaventura daily, the majority of its people, who are Afro-Colombians, live in poverty and misery. Our meeting with residents there took place on a road literally made out of garbage.

On our return to Bogota, during the final stretch of our delegation, we met with Sinaltrainal, a small but scrappy union that was behind the international Killer Coke boycott campaign of over a decade ago. When I introduced myself as a UE organizer and stated that our union has 35,000 members the Sinaltrainal workers were amazed to hear the number. Their union, which represents workers at Coca-Cola, Nestle, and Sodexo, has less than 3,000 members nationally and the majority of them do not enjoy the protections of a collective bargaining agreement. This is due to the shell games used by national and international employers to evade their responsibilities, the corruption of professionals in the legal system who act as servants of the rich rather than as defenders of the rights of people, and the campaign of extermination waged against the union by hired paramilitary killers. Over 30 Sinaltrainal members have been murdered since the union’s founding in 1984. (In total, over 3,000 trade unionists have been assassinated in Colombia since 1977, more than in the rest of the world combined.) Despite all of this, the union refuses to give up and continues organizing and fighting for a better future for Colombia’s poor and working-class majority.

Our final meeting of the delegation was with members of Asotrecol, an association of injured ex-GM workers whose members have spent the last 8.5 years living in a tent across the street from the U.S. Embassy. They were fired after sustaining workplace injuries inside the GM factory in Bogota and have yet to receive medical benefits or severance and are demanding their jobs back. Though the ex-workers have not yet won their demands, workers inside the Colmotores GM plant have seen an improvement in working conditions thanks to the struggle of those on the outside.

Throughout our stay in Colombia, we kept hearing two things from those we met. First, they distinguish between the American people and the government of the United States, and harbor no ill will toward the people. The reason Colombians made this distinction is that U.S. government policies toward Colombia are much to blame for the state of crisis that the labor movement and workers find themselves in there. Through Plan Colombia, and using the so-called war on drugs as a pretext, the U.S. provided the Colombian state with more than $12 billion from 2000-2015 in mostly military “aid.” These funds went to Colombia’s military, which has the worst human rights record in the Western hemisphere, and have served to maintain the ruling elite in power by repressing unions and the political opposition.

Furthermore, in 2012, with workers in Colombia having been bloodied and beaten down with the help of the U.S. government and transnational corporations, the United States entered into a “free trade” agreement with Colombia that harms the interests of workers in both countries. As with other such schemes, the United States-Colombia Trade Promotion Agreement allows foreign investors virtually free reign to do as they please in Colombia and enables them to blackmail and hold national governments hostage by threatening to move their capital elsewhere if workers demand more (or basic) rights and a dignified standard of living.

The second thing everyone we met with emphasized was how important international solidarity is for those involved in the labor movement and social struggles in Colombia. In many cases, support from unions and other peoples abroad has saved lives and allowed organizations to survive despite all the challenges. Our delegation allowed workers from the United States to meet (and be greatly inspired by) workers in Colombia and forge bonds that can serve to support one another’s struggles in the future. To help ensure continued international delegations and worker-to-worker exchanges, please make a donation to UE’s Research and Education Fund by going to http://www.ueref.org. The powers that be seek to divide workers in order to conquer the world. Workers should respond by uniting in a common front on a global scale.

More photos are available on the UE Research and Education Fund Facebook page. 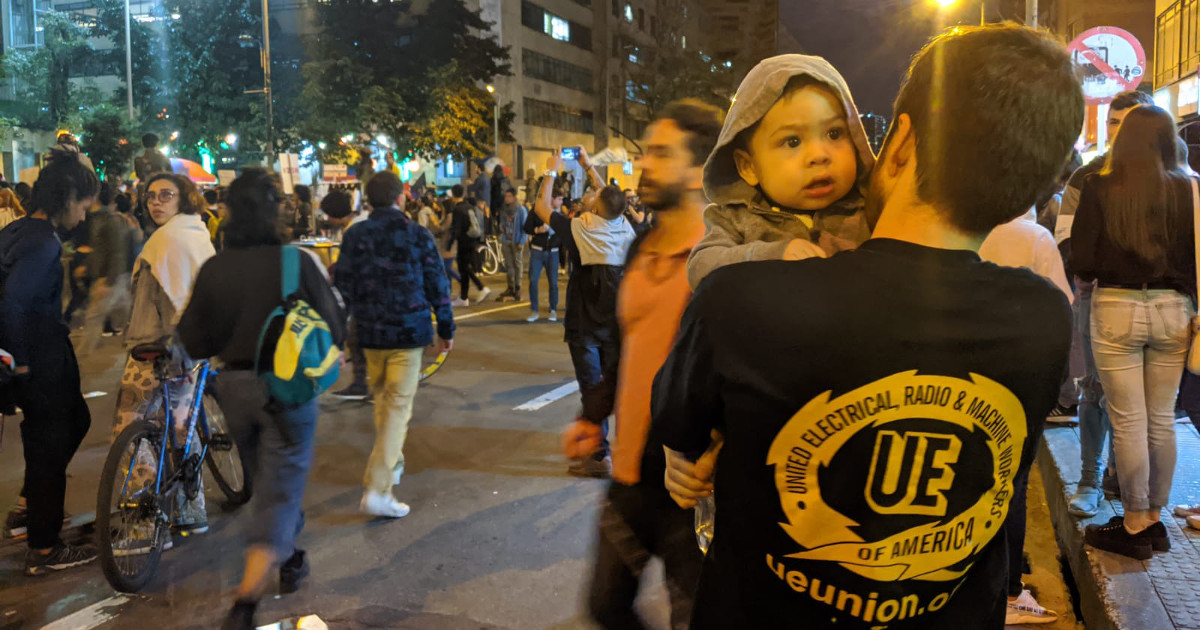 On this Giving Tuesday, please consider making a donation to help us grow our international solidarity work in the new year.